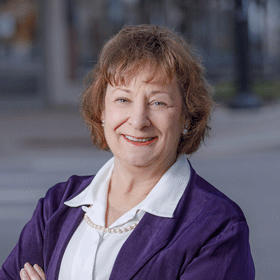 Catherine is a senior project manager with extensive knowledge of infrastructu...

When you have completed a comprehensive inflow/infiltration (I/I) reduction program, but I/I levels are still not where you want them to be, what’s next?
Finding those persistent sources requires diligence and good quality data.

A suburban Chicago community was faced with these issues after 10- and 25-year storms caused hundreds of reported basement backups and an EPA regulatory action. After determining that I/I was still a major issue, RJN conducted additional sanitary sewer inspections and installed permanent flow meters around the city to continue to monitor flow levels and measure rehabilitation success. Manholes were rehabilitated and sewers lined, but I/I level drops still lagged.

Flow monitoring pointed to high levels of I/I, the majority of which was coming from private sector sources. Since the laterals were the responsibility of the property owner, the I/I reduction program was further developed beyond RJN’s traditional engineering solutions to include public outreach, recommendations for building code revisions and development of I/I compliance for building expansion. Much of the public sector I/I remediation and sewer rehabilitations were implemented concurrently with the private sector remediation program.

Smoke Testing all the South Basins

The smoke testing identified public sector defects, including manhole frame seals and mainline defects. The testing also revealed 522 indirect cross connections between the storm and the sanitary sewers which led to follow-up dye flooding to further pinpoint and remediate these sources of I/I. 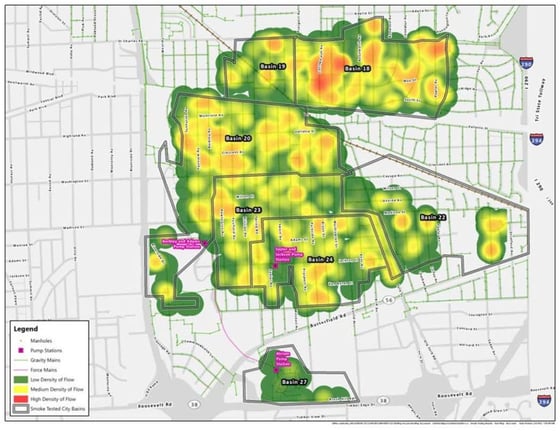 In addition to enforcing the disconnection of underground downspouts, the City also implemented a program of covering window wells that smoked (due to their connection to foundation drains) and replacing broken or missing cleanout caps. This inexpensive and practical solution educates residents on the City’s efforts as well as reduces the cumulative effects of inflow.

To identify storm sumps still connected to the collection system, RJN inspectors entered 3,150 properties in the southern half of the City including single-family residences, commercial buildings, multi-family, government structures, churches, and schools. Non-compliant owners were advised that their improperly connected sumps needed to be corrected and the City was providing a cost-sharing program for disconnection in a timely manner. Of major concern were the illegal sumps and diverters that had been identified for correction in 1988 by a previous I/I reduction initiative. Some of these improper storm sumps had since been reconnected.

With sump pumps and downspouts disconnected, sewers lined, and smaller defects such as missing cleanout caps addressed, the remaining defect sources were laterals and foundation drains. With the foundation drains being so cost-prohibitive to remove, and significant teardown activity within the area, addressing laterals remained the only short-term method to further reduce the excess flows.

Of the 529 storm structures that smoked, the City undertook dye flood testing on those that exhibited high or medium smoke levels. Most notable during smoke testing was one basin where aged storm structures were concentrated. Almost every catch basin exhibited smoke at a high level (structures depicted below). 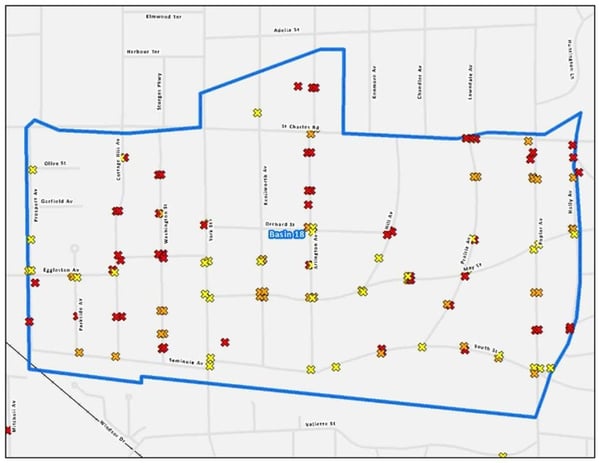 Dye flooding did identify some mainline defects; however, most of the flow was coming from laterals and lateral connections. In some instances, the flow velocity was so high that the inspection camera overturned, and the inspection could not proceed until some of the water in the storm sewer had been released. More than 500 laterals exhibited leaks varying from 1 GPM to over 100 GPM.

"Significant flows were attributable to disconnected laterals that had not been capped and interstitial flow occurred where the connection at the mainline had not been fully sealed."

In an effort to prioritize laterals for rehabilitation, lateral televising was undertaken. This was conducted on the building connections whenever possible, so that the condition of the portion of the lateral on private property could also be evaluated and to look for the presence of foundation drains.

RJN recommended a pilot rehabilitation program that focused on a single basin that exhibited high I/I levels. This approach was used to show that private sector I/I sources could be found and meaningful I/I reduction could be achieved through their correction.

The pilot basin was selected for several reasons: it is located upstream of all basins so it could be monitored discretely; it is one of the oldest areas of the City, experiencing significant teardown activity; and approximately 50 percent of the area was known to have foundation drains.

More than 210 laterals were found with flows greater than 10 GPM in the City’s South basins. In the pilot basin, abandoned or never-used laterals were identified on 25 segments, almost 17% of the connections. These leaks correlated to many of the highest recorded dye flows. These were each sealed at the connection with a short-liner.

New PVC sewer connections from recent construction were evaluated and were also found to be leaking. In most instances, the leaks were due to interstitial flow between the liner and the new PVC connection. A short connection liner was installed to seal the connection and overlap the first few feet into the lateral. The majority of the laterals had a cleanout installed on the edge of the right-of-way and a lateral liner installed from the main to the cleanout. About eight percent of the laterals required a point repair before the lateral could be lined. In addition, it was found that the laterals abandoned as a result of teardown activity were contributing more flow, due to improper sealing, than had been removed with the foundation drain disconnection.

The results of RJN’s SSES and investigations, on both the public and private side, have led to modifications to the City’s annual lining program, building code enforcement and regulation changes, and improved public stormwater and sewer education. Now, efforts are made to ensure that no abandoned laterals are re-opened during mainline lining and that laterals abandoned by builders are properly sealed at the connection.

To date, approximately 30% of the laterals in the target basin have been rehabilitated.

Getting and keeping excess flow down requires a concerted and sustained effort on all fronts, both public and private.

Catherine is a senior project manager with extensive knowledge of infrastructu...